Donaldson Run neighborhood is located in North Arlington in Zip Code 22207, and is bounded by the Potomac River and Beechwood Circle to the north and east, Vacation Lane, 25th Street N and 26th Street N to the south, Vernon Street, Old Dominion Drive to the south and west, and Washington Golf and Country Club to the north and west. READ MORE HERE.

Included below are homes for sale in Donaldson Run. If you would like more information on any of  these Donaldson Run real estate listings, just click the "Request More Information" button when viewing the details of that property. We can provide you with disclosures, past sales history, dates and prices of homes recently sold nearby, and more.

And, if you haven't already, be sure to register for a free account so that you can receive email alerts whenever new Donaldson Run listings come on the market.

$1,249,000
45
1514 Buchanan St N
Arlington, VA 22205
Waycroft - Woodlawn
3
Beds
2F11/2
Baths
2,595
Sq.Ft.
TTR Sotheby's International Realty
The information being provided by Bright MLS is for the consumer's personal, non-commercial use and may not be used for any purpose other than to identify prospective properties consumer may be interested in purchasing. Any information relating to real estate for sale referenced on this web site comes from the Internet Data Exchange (IDX) program of the Bright MLS. SAMSON PROPERTIES is not a Multiple Listing Service (MLS), nor does it offer MLS access. This website is a service of SAMSON PROPERTIES, a broker participant of Bright MLS. This web site may reference real estate listing(s) held by a brokerage firm other than the broker and/or agent who owns this web site.

Donaldson Run is a hilly and wooded neighborhood.  Residents are very protective of their green space and wish to keep it so.    They have a very active civic association - Donaldson Run Civic Association – and one of its goals is to preserve green space along with the high quality of the environment.

Donaldson Run has two tributaries that are part of a Stream Restoration Projectwhich aims to prevent erosion of the stream and its banks, as well as pollution of the Chesapeake Bay. 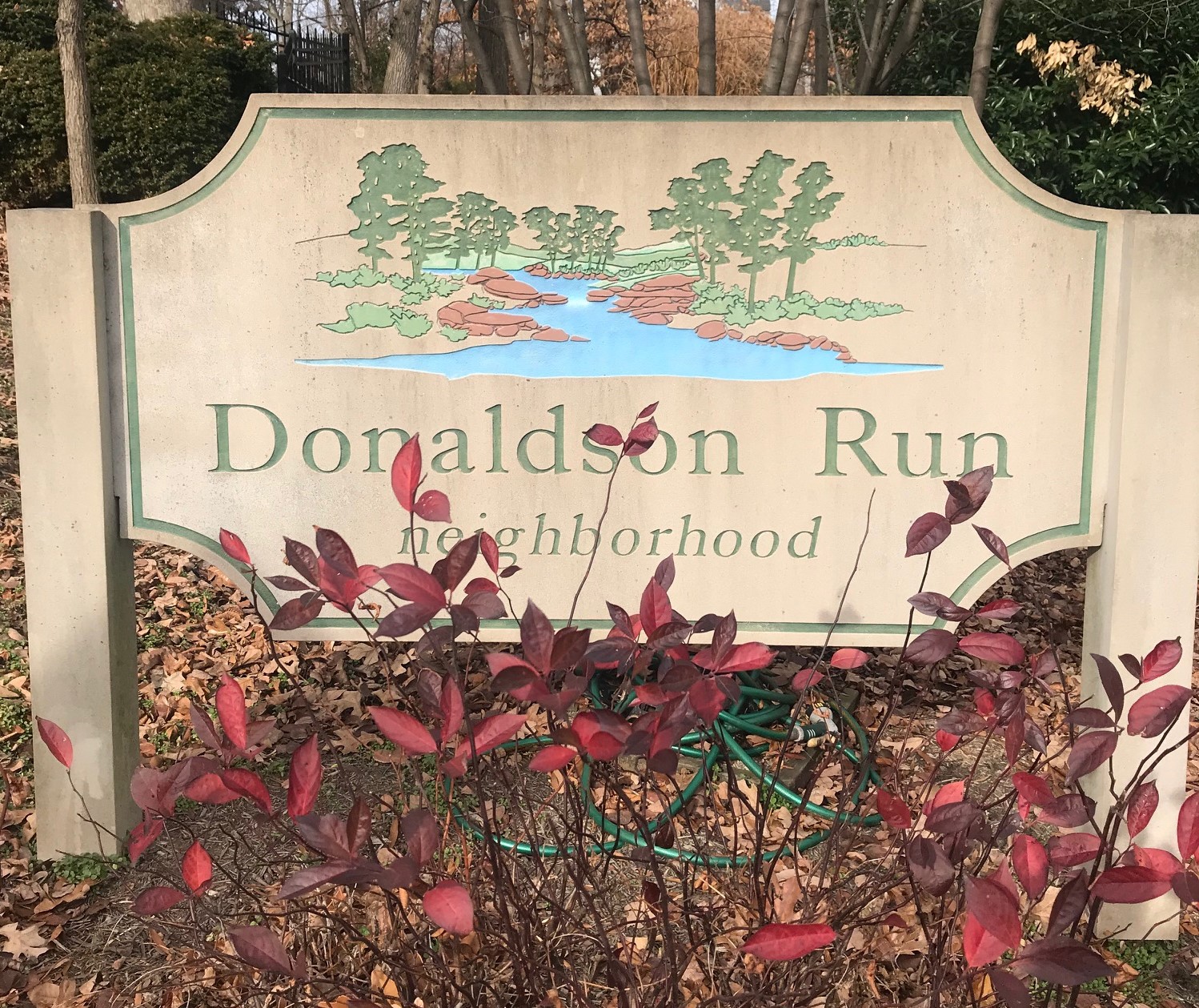 The 67-acre Potomac Overlook Regional Park is their signature attraction and the residents are not afraid of mounting sundry protests against any planned development. This park is part of Northern Virginia Regional Park Authority which overseas more than 10,000 acres of woodlands, streams, nature reserves, parks, and historic sites in Northern Virginia.

There are several activities for children, including Camp Overlook for those in kindergarten up to the 10th grade.  There are summer outdoor concerts as well as nature trails.

A private Recreation Center and pool can be found next to the park, for which there is always a waiting list.

As if 67 acres of prime parkland was not enough, residents of Donaldson Run have three (3) county-owned parks at their disposal as well.

The first is ZacharyTaylor Park. This is a 44-acre park that is designed to help you fall in love with nature and the outdoors. It features several walking paths and nature trails. The other two are smaller parks -  Lee Heights Park and Marcey Road Park.

Most of the houses in Donaldson Run were built between 1941 and 1960 and come in a wide variety of architectural styles.  Ramblers take the most popular award, followed by colonials; and there are townhomes, split levels, cape cods, farmhouses as well as contemporaries.

Transportation In and Around Donaldson Run

Donaldson Run is a car-oriented community as evidenced by its low Walk Score of 44.  This does not mean that transportation is lacking. It is served by two Metro Bus lines – 53A and 53B.  As well, you can travel to Ballston Metro and access the Orange and Silver Lines.

There are four (4) Elementary Schools –

There is one Middle School –

There are three (3) High Schools –

Lee Heights Shops is the closest shopping area at 4500 Lee Highway.  There is also Lee Harrison Shopping Center at 2425 N Harrison Street.  You can also hop over to Clarendon to patronize the Market Common shops at 2800 Clarendon Boulevard, as well as Whole Foods and Trader Joe’s.

For families with young children, Donaldson Run is an ideal Arlington VA community, of course, if you can afford the price tag.

But remember, Arlington has nearly sixty (60) neighborhoods from which to choose your little piece of heaven.